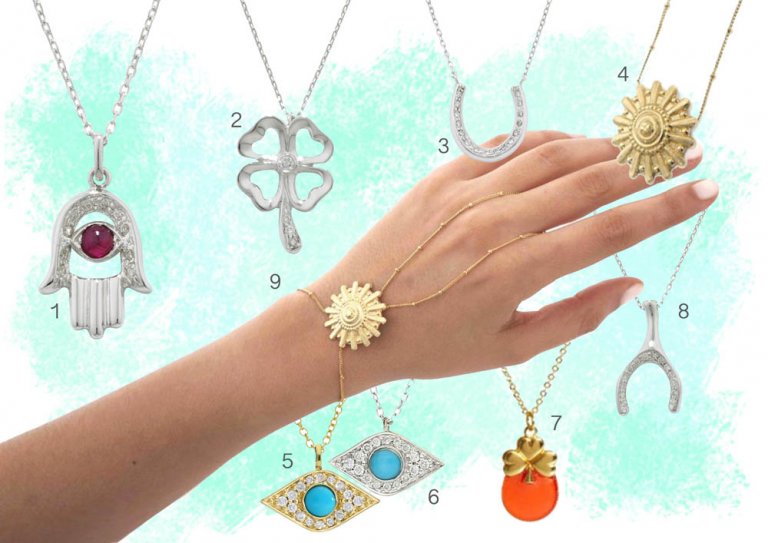 Its St Patrick’s Day and we’re feeling the lucky of the Irish rubbing off on us! From the Four Leaf Clover to the ever-popular Hamsa Hand, we’ve decided to look into the superstitions and original beliefs behind some well-known, lucky talisman jewellery…

THE FOUR LEAF CLOVER – Formed of three heart shaped leaves, the Shamrock is the lucky emblem of St Patrick’s Day (alongside the traditional Leprechaun of course). Its name originates from the Irish term Seamróg that has morphed over the centuries into the modern day term. Similar to the traditional Shamrock, the Four Leaf Clover is often mistaken for the iconic St Patrick’s Day signifier.  Each of the four leaves represent an element of good will – said to bring the holder Faith, Hope, Love & Luck, whilst also helping to ward off evil, witchcraft & bad omens. But beware, the luck of the clover is said to disappear if it is passed to another person, so be sure not to let it out of your sight!

LUNAR & SOLAR – Often depicted in delicate tattoos; Sun & Moon symbols are often used without full knowledge of their links to good fortune. The Sun is generally associated with the Fraternal, whilst the moon is a key Maternal symbol, with links to a female goddess. Solar symbols are also thought to represent rebirth, strength & power with the circular forms making reference to the concept of the circle of life. If the Lunar & Solar Symbols are merged together, it can represent the combining of opposites, showing compromise instead of conflict.

THE HAND OF FAMITA – With variations of the symbol used in Muslim & Jewish cultures, the Hamsa Hand or Hand of Fatima has been globally adapted as a symbol of good luck. The Evil Eye, often found at the base of the palm, is thought to protect you from evil spirits according to folklore superstitions. Widely regarded as a sign that brings the owner good luck, happiness, health & good fortune, Hamsa’s are often found on pendant necklaces & delicate charm bracelets.